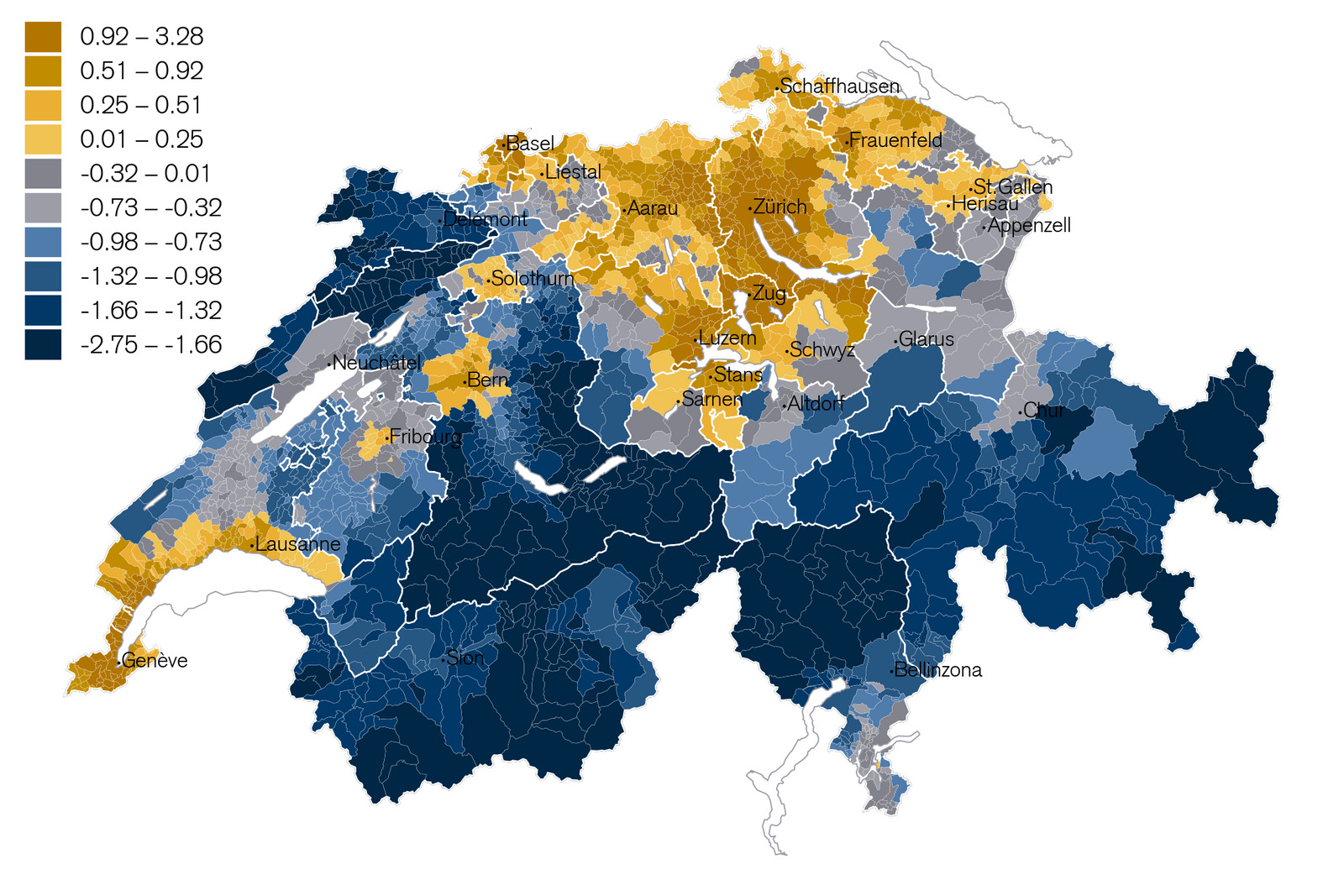 The Locational Quality Indicator (LQI) compiled by Credit Suisse measures the attractiveness of Swiss cantons and regions to business compared to Switzerland's average. The LQI is based on the following seven quantitative sub-indicators: tax burden on private individuals and legal entities, availability of highly qualified personnel and specialist labor, population accessibility, employee accessibility, and access to airports.

Impact analysis on the role of business and technology parks

Swissparks.ch has initiated an impact analysis on the role of business and technology parks. The…

Impact analysis on the role of business and technology parks

Swissparks.ch has initiated an impact analysis on the role of business and technology parks. The four participating centers Bio-Technopark Schlieren-Zurich, Business Parc Reinach, EPFL Innovation Park and Startfeld are characterized by resilient and dynamic companies.

Swissparks.ch has commissioned an impact analysis on the role of business and technology parks in Switzerland's innovation ecosystem, the association of Swiss technology parks and incubators informs in a statement. The centers Bio-Technopark Schlieren-Zurich, Business Parc Reinach, EPFL Innovation Park and Startfeld participated in the benchmarking conducted by BAK Economics and EvalueScience.

All centers show a very high percentage of private funding for operating costs, ranging from 67 to 99 percent. According to the release, this indicates "a sustainable business model for the centers and the important role of the private sector." Swisspark.ch also emphasizes the role of the centers as an interface between business and science.

"The results demonstrate the unique role that technology parks and business parks play in the innovation ecosystem," association president René Hausammann is quoted as saying in the release. "A key value is the unprecedented networking that hosted companies experience, both internally and with external sector players such as investors, business development, universities and other technology transfer partners, coaching and support organizations." hs/Cafe Europe 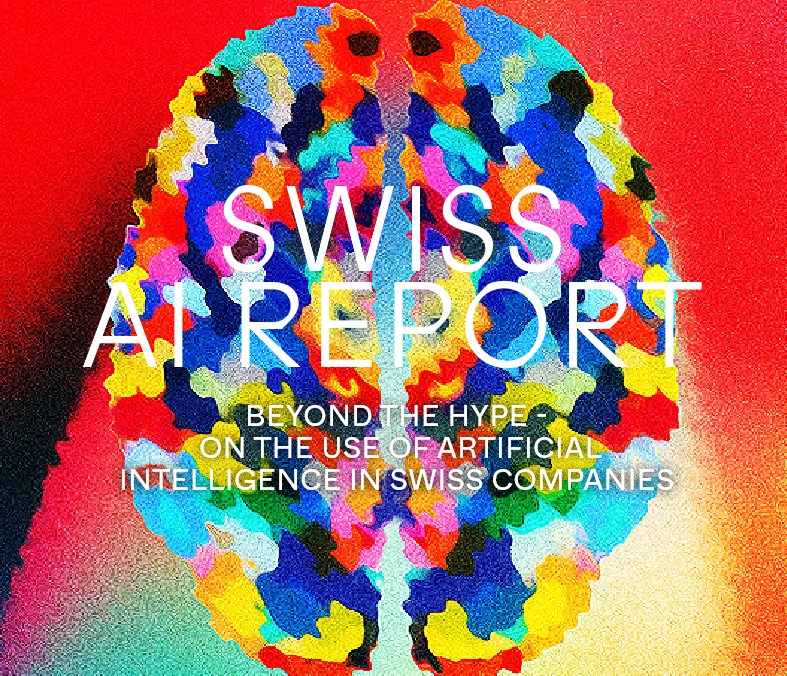 The Swiss AI Report is the first to systematically analyze the use and development of artificial intelligence in Swiss companies.

The report provides an objective and differentiated insight into the practice - far away from speculations and hypes. This shows that there is a high level of strategic awareness in Swiss companies when it comes to AI. Networking between research institutions and the private sector is intensive. Companies want to use AI to optimize their core business. However, they still pay little attention to ethical issues or the growing demand for energy.

The Swiss AI Report was commissioned by the Canton of Schwyz and created by the think tank W.I.R.E and the Mindfire Foundation.

The research follows the Topol Review (2019) recommendation to develop a healthcare workforce able and willing to use AI and robotics, and is part of Health Education England’s Digital, AI and Robotics Technologies in Education (DART-Ed) programme to understand the impact of advances of these technologies on education and training requirements. Supporting healthcare workers to feel confident in identifying when and how to use AI is a main objective of the NHS AI Lab, and a key component of its vision for the safe, effective, and ethical adoption of AI technologies across health and care.

Driverless - everything under control? Self-driving cars in Switzerland’s traffic system

Driverless - everything under control? Self-driving cars in Switzerland’s traffic system

The role and significance of self-driving cars in Switzerland will be determined in the future by the politically set guard rails. Society and politics must define the role of the state and clarify how the public sector and private companies should share the new tasks. In addition to technological issues, numerous questions also arise regarding economics, law, politics, society and ethics.

Zurich’s innovative power is strong, as a comparison with 249 other regions shows. Nevertheless, there…

Zurich’s innovative power is strong, as a comparison with 249 other regions shows. Nevertheless, there is room for improvement. You can read more in the current issue of the “Zürcher Wirtschaftsmonitoring” (German only).

SATW compiled a research overview on the topic of “Autonomous Systems” on behalf of the Division of Business and Economic Development. This impressively shows how diverse the research in the field of “autonomous systems” is in the Canton of Zurich.

This is the second edition of the SWISS DIGITAL HEALTH STARTUP MAP status report, following the first publication in October 2021. In this report, Health Trends provides an update on the latest changes on the map. You will learn which digital health startups have been added, including detailed information about them. In addition, we inform you which digital health companies are no longer part of the map. And, you will also find a lot of background information on Health Trends in the report.

The Future of Digital Health

In The Future of Digital Health, a report by BCG Digital Ventures, we delve into…

The Future of Digital Health

In The Future of Digital Health, a report by BCG Digital Ventures, we delve into what industry leaders must know in order to navigate the changing means and modes of health care delivery.

The COVID-19 pandemic continues to greatly accelerate the transition to digital health year over year.
‍
As patients, many of us are no longer sitting in a doctor’s office or waiting in line to collect prescription medications at a brick-and-mortar drugstore. It is starting to feel like the norm to find services and solutions on our own time and location - leading to a “care anywhere model”.
‍
As providers, technology has pushed us to innovate and disrupt health care services as we learn to embrace the ‘new normal’ to better serve patients through digital companion solutions, telemedicine, or leveraging AI-solution for more informed clinical decision making.